1. Something on your October calendar that makes you smile?

Several things! Besides Thanksgiving, there's the third annual L'Harmas retreat weekend near the end of the month. 2. Food for the soul or music for the soul...which camp are you in? Tell us why?

Is it either/or? I like ideas for the soul, but food and music are good too. Also I need to start taking more photos.

3. What are two or three things you've learned recently as the result of an online search?

a) That there are stop-motion Lego videos for the major battles involving Pyrrhus of Epirus. Really, who knew? b) How to make oven-dried cherry tomatoes (now I wish we had more ripening so I could make another batch).  c) That there are two 1936 movies, one called Sabotage and based on Joseph Conrad's book The Secret Agent, and another called Secret Agent and starring Sir John Gielgud and Peter Lorre.  The VHS movie we found was the second one, but the blurb on the (dollar-store-type) box described the first one. Very confusing, but we liked the movie, especially Peter Lorre's curly hair and earring.

4. Share your favorite game day recipe. You can describe it, post the how-to, or add a link to the actual recipe.


I'm not sure what "Game Day" is or what we eat for one. Obviously I'm not into the right sorts of games. Do you mean something  like those Superbowl parties with nachos and meatballs and things? (In Ontario right now, "game day" might be cheering for the Toronto Blue Jays.)

5. What are your five essential steps for creating the perfect morning routine?

Waking up is good.

It's the first of October, and it's colder; but we have one of those blue fall skies.7. Sum up your September in seven words or less.

Discovering the post-homeschooling life.8.  Insert your own random thought here.

Elephants. The new Plutarch study I'm working on is full of them. One funny bit is that, in the old translation, there's an elephant who picks up a body and carries it on his 'two tushes." I'm pretty sure the actual elephant part involved was "tusks." 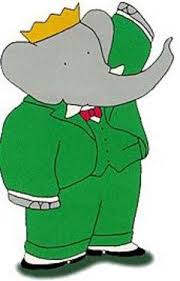 Linked from More Than a Hodgepodge at This Side of the Pond.
Posted by Mama Squirrel at Thursday, October 01, 2015

We finished homeschooling our children several years ago. They've since moved on to universities (two daughters) and the US Marine Corps and US Navy (two sons). Now, we're trying to adapt to a life without children in the house. It isn't easy! I don't think that there is any way to totally prepare oneself for an empty nest. How are you adapting to this new stage of life, post-homeschooling?

Fall blue skies are my favorite! One of the things I enjoy most about the Hodgepodge is I always learn something new. Lots this week with everybody googling : ) I had to click your link to find out what L'Harmas meant and now I know. Enjoy your weekend!