In the Middle of a Wednesday Hodgepodge

Here are the questions to this week's Wednesday Hodgepodge. Answer on your own blog, then hop back to From This Side of the Pond to share answers with the universe. Here we go-

1. August 12th is National Middle Child Day...are you a middle child? If not, where in your family do you fall in terms of birth order? Do you hold true to the typical characteristics of oldest-middle-youngest-only child? (a quick list can be found here) Elaborate.
Oldest daughter of an oldest daughter of an oldest daughter. My fate was predetermined.2. Tell us about a time you felt like (or you actually were) in the middle of nowhere.
Any time you feel seriously lost in a strange place can feel like nowhere. When you're a child lost in a store, that's big enough to feel like nowhere. When I was about thirteen, I went with a summer youth program to watch the Toronto Blue Jays play Kansas City (they lost), but after the game I got turned around and couldn't find the right bus. There were a LOT of buses in that parking lot, and who's going to remember the name of whatever company owned the bus? I had visions of living in the Exhibition Place parking lot forever (this was a few years before they built the Skydome). All of a sudden one of the names did look familiar, and there was everybody just lining up to get on the bus. My hour of panic turned out to have been only a few minutes.3. What's something you're smack in the middle of currently?
A longterm book project which is starting to come near its end.
Also, helping our youngest Squirreling funnel her belongings from this Treehouse to her new place.4. What's a food you love to eat that has something delicious in the middle?
Stuffed shells with ricotta-spinach filling.
You thought I was going to say chocolates?
5. Share a memory from your middle school days, or junior high if that's what your school dubbed kids somewhere between grades 6-8.
I thought I just did that...anyway, those aren't years I usually want to spend much time revisiting.
Okay. Regional French contest, third prize. Polaroid picture at the end of the day. The trophy was supposed to go to my school, but they didn't want it, so I kept it on the bookshelf for the next thirty-seven years. 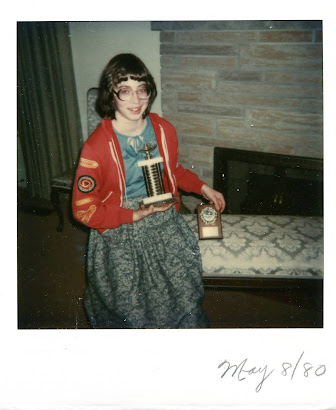 6. Insert your own random thought here.
Last week I promised to post a picture of the thing I was waiting for in the mail. Here it is: 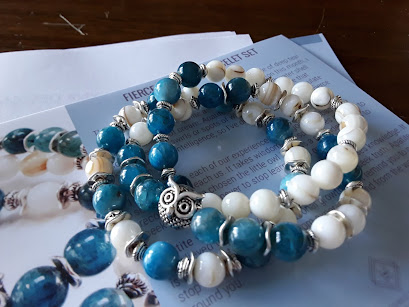 These are the Fierce Wisdom bracelets from Fierce Lynx Designs in New Brunswick. If you have spent any time on the Vivienne Files website, you will have seen Fierce Lynx bracelets mentioned there. I chose them to honour the spirit of some family members who are no longer with us. (I didn't mean I honour spirits, just their spirit.)  They're also one of my favourite colours.
Linked from The Wednesday Hodgepodge at From This Side of the Pond.
Posted by Mama Squirrel at Wednesday, August 12, 2020

I don't know of many people who enjoyed middle school. Enjoyed reading your responses. Have a great day :)

What a gorgeous piece of jewelry. I love the colors! You told your 'lost' story well. Glad it was minutes and not hours. Take care!

That is one of my favorite colors, too -- turquoise.
Being lost in a parking lot full of busses would be fodder for a nightmare.