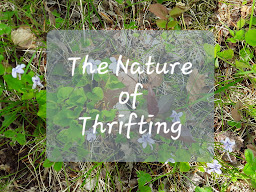 There are some annoyed people out there who feel it's wrong-handed to dump on limited-budget fast-fashion shoppers, and who blame that situation at least partly on the gentrification of thrift stores.

Yes, thrift stores went through a change. I've mentioned before that, years ago, I'd walk into the Salvation Army store and things wouldn't even be priced. The woman behind the counter decided what she thought you could/should pay for the pants. A little strange, and sometimes reversely discriminatory (people with little money don't always look like it), but that was it. Then the old stores closed, and new ones re-opened in shopping plazas and places further out; the price of the pants became fixed, and, often, higher. The new locations and higher prices, as well as the rival for-profit stores, did somewhat change the customer base.

But as most people do realize about charity-based thrift stores, they do not exist primarily to give people with low budgets somewhere to shop, although that is one of their benefits to the community. They exist to raise money for their organizations, and/or to provide training and work/volunteer opportunities. If a thrift store decides to brand itself as a "boutique" to attract new customers, that may not help someone who just needs pants, but it may also be a matter of survival for the store. The rent has to be paid, and those of us living through 2020 can hardly be unaware of how little it takes to push businesses, including non-profits, over the edge.

Thrift stores, in spite of the predicament they've been put into of having to figure out what to do with the mounds of donated stuff, are nevertheless proud of their ability to help "green" the planet a bit. If people can be encouraged to use some of the stuff that already exists instead of feeding the corporate sausage machine, that's a good thing, right?

But, the argument goes on...and I'm trying really hard to see the logic in this...the thrift stores haven't "done their job" (whatever that is) for people under financial stress, and so these same people are not only entitled to buy fast fashion, but should buy fast fashion.

Sorry, I'm not buying it.

Does that argument not sound demeaning to you? More of an us-and-them thing than we had going in the first place? Me, I''m privileged to thrift a good cotton t-shirt...but you, you go buy the piece of new rayon junk. And never mind what the factory conditions were for the women who sewed the shirt, or what that gigantic order of shirts did to make the planet a bit worse off.

I'm all for not judging where people buy their clothes. How would I know where you bought yours unless I asked? How would you know where I bought mine unless you asked? If you can travel to one store or another easily, that might even outweigh (to some extent) the benefit of, say, ordering something ecological online and having it shipped; or having to travel a long and inconvenient distance to a thrift store. I used to live next to a discount store, and it was very handy.

But supporting fast fashion, and bashing thrift stores, as a way to support human rights?

Take it from someone wearing a pair of one-dollar jeans. 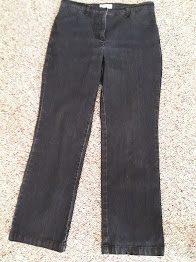