The words Frugal and Christmas don't seem to go together any better than Diet and Christmas do. Christmas makes you think of extra--extra food, extra busy, extra stuff to buy. Even in times past (before malls and Muzak), holiday celebrations meant extra noise (even firecrackers), extra music, extra spices and sugar and things that were usually beyond most peoples' reach. Extra-vagance, whatever that meant at the time. Putting aside the usual "we can't afford it" for a few once-a-year treats. Cinnamon. Oranges. Oysters.

"I ate up the oyster crackers, and I ate up the Christmas candy, but by jinks," said Pa, "I brought the oysters home!"--Laura Ingalls Wilder, On the Banks of Plum Creek

But those of us who--for whatever reason--normally follow semi-frugal, extremely-frugal, or absolutely-broke-frugal spending habits the rest of the year, don't always want to throw away the money we've saved (or that we don't have) on one month-long spending spree in December. Putting a stack of holiday fliers in front of a reformed spend-a-holic makes as much sense as telling an alcoholic to forget all the rules and go on a bender. One way or another, we'll pay for it in January. 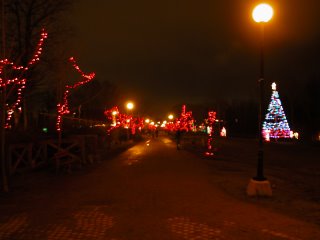 So focus instead on the "extras" that don't cost anything.

Enjoy Christmas lights in the park.

Borrow Christmas books and videos from the library, if you can't find what you want online or at the thrift shop. (Or support local store owners who need your business more than the giant onlines do.)

Spend a little less time eating. Really. People drop over and you want to feed them something--but does it have to be puff pastry and shrimp? You don't have to pare down to the extent that skinflint Mr. Bean did (he ran out of Twiglets and used twigs instead), but most people can manage to get by on crackers and cheese, or muffins, or scones, or grapes, or Peak Freans biscuits. If the Good Cavekeeping lady drops by, you can tell her I gave you permission.

Stretch what you have a little. Don't do it all at once, eat it all at once, or watch it all at once. In The Long Winter, Ma and the girls agreed to save the bundle of story magazines they'd received until Christmas, just in case the Christmas barrel they expected didn't arrive. (It didn't get through until May.)

"I don't want to," Laura said.
"Nobody does," said Mary. "But it's good for us."
Sometimes Laura did not even want to be good. But after another silent moment she said,"Well, if you and Mary want to, Ma, I will. It will give us something to look forward to for Christmas."--Laura Ingalls Wilder, The Long Winter

Or play Fraggle Pebble presents, à la Muppet Family Christmas. The Fraggles give the same Fraggle Pebble to each other over and over again, back and forth, just for the fun of giving it. (Check out that link--it's a whole photo blog synopsis of the video. The spelling's not great, and it was Bert who had to dress up as Mamma, not Ernie, but still.)

Listen to whatever music makes you happy, even if it's on the radio. Go to church and sing.

And have a wonderful holiday.
Posted by Mama Squirrel at Monday, December 18, 2006

Excellent advice for anyone!

This is wonderful advice and what we are trying to do with our family this year. Thank you for this beautiful reminder.

It's all about the little things, isn't it? All of the people I know who spend their way to a "perfect" Christmas are the same ones who never think that the reality measures up with their expectations. And have the 'holiday blues' afterwards, too.