So how are we "homeschooling on less" this year?

As the Deputy Headmistress sagely remarked this week, sometimes the best resource is just the one you already own.  We are re-using or recycling several things that the older girls used in middle school:  Apologia General Science (without the Windows 95 disc, though); Powerglide French; The Easy Grammar Plus.  We are playing vocabulary games with a dictionary I've owned since university, and experimenting with a math board game that the Apprentice was given when she was really too young to appreciate it.

Under the mesmerizing influence of Hope for Homeschool's organizing posts, I did buy a bin for hanging file folders, and a beauty-ful purple binder at Staples.  But most of the components of our (very modified) workboxing system have been recycled from four years ago, including peeling a few sticky-Velcro dots from containers that wouldn't work this year--wrong size, wrong shape--and re-sticking them on others.

We are using (or will be using) quite a few things collected at the thrift store. 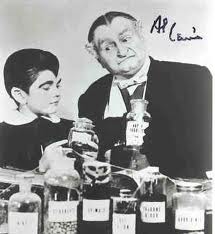 And several free online resources:  vintage history books, math books that I downloaded as Kindle freebies, printable maps.  Not to mention Ambleside Online, and Donna Young's indispensable website.  And the photo of Grandpa Munster in his lab that I printed out to decorate our science-stuff box.

We bought several packages of lined paper when The Big Mart had a door-crasher sale of 15 cents a pack.

Dollygirl decorated one binder with a collection of stickers, and a (really awesome) science binder with some printed-out photos of dolls doing science.  Really. 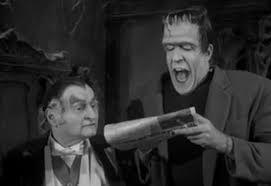 But in the end...whether you're homeschooling cheaply or extravagantly, whether or not you have a "good year" isn't just about the stuff.  Because staying positive doesn't cost extra.  Neither does finding a schedule that works for you, and making sure there's variety in the school day and not too much homework.  Also, in some subjects, letting the student set the pace.  I know the classic CM scenario is "You have two pages and twenty minutes; if you can do them correctly in less than that time, you get the rest of the time to yourself." But sometimes it works just as well to say, "Work for twenty minutes.  How much can you get done?"  They might surprise you.

Making a "Herman Munster's Citizenship Class" bookmark, with space for writing in new words or other notes, took a few minutes and a piece of cardstock.  So it was almost free. (If you ever watch The Munsters, you know that being a good citizen is very important to Herman.)

Using the newspaper to pick out a few key current events was (more or less) free.  We had the Premier of Ontario squeezing tomatoes at the farmer's market, a story about a local homeless shelter that's dealing with a health-department enforcement on where its food is prepared (no more home-baked brownies); and the fact that two world leaders don't want to sit almost-next to each other at the G-20 conference.  Every kid understands what that's about, if not exactly why. (I am not meaning to make light of current serious world events; this was just a way to try to bring a very large story into a smaller compass.)

Letting Dollygirl wear her pajamas to school on Friday was, obviously, free.  This was inspired by our first-week handicraft, a pair of doll pajamas.  Dollygirl sewed the bottoms, I sewed the top.  The doll in the pajamas came to school too. 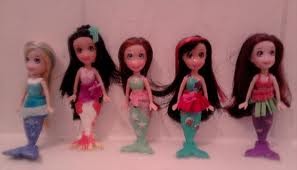 Like they say on the commercials: priceless.
Posted by Mama Squirrel at Friday, September 06, 2013