Cinnamon cake for a fall birthday 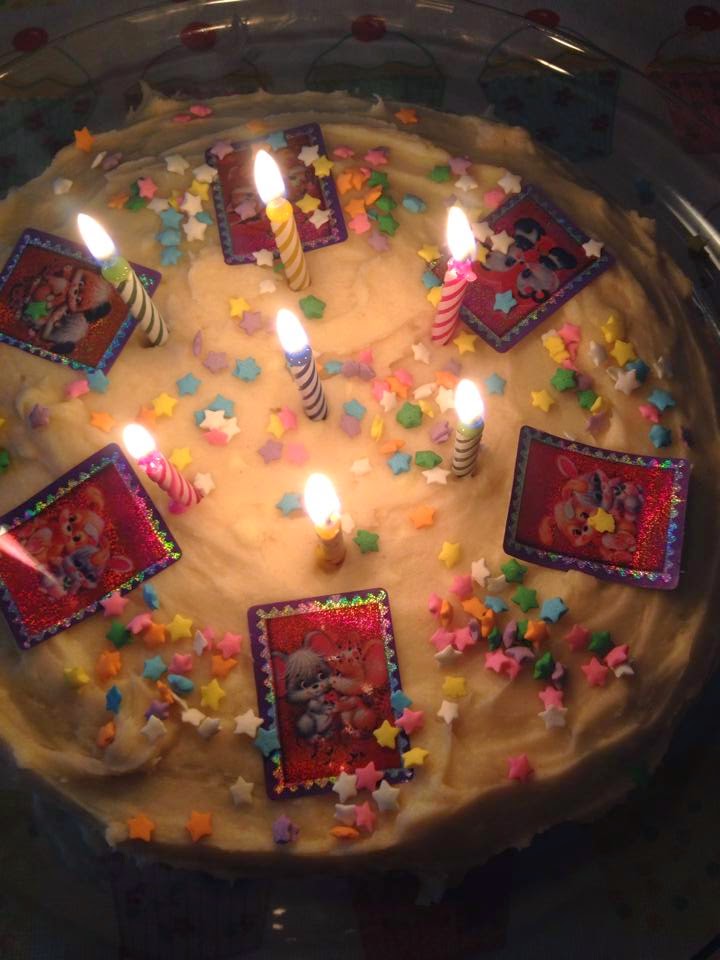 Ponytails had a birthday this month.  She found this recipe for Cinnamon Cake on For Bakes Sake, but we changed it a bit to make it one layer (it was just for our family); frosted it with plain butter icing with a bit of cinnamon added (instead of the cream cheese frosting); and did the spices a bit differently.  This is our version:

Spice Birthday Cake (makes two layers, or one layer plus a dozen cupcakes):

Before you start mixing everything together, this is what I did: I mixed the flour, baking powder and salt, but left out the cinnamon. I followed the directions otherwise until it was ready to go into the pans. I used about half the (unspiced) batter to make a dozen small cupcakes. Then I added 1 tsp. cinnamon and about 1/3 tsp. nutmeg to the batter that was left in the bowl, and baked that as the birthday cake. I didn't want to take all the air out of the cake after I had just spent all that electricity beating it in, so I just swirled the spices in gently, and that gave the cake an interesting swirly-spice effect. I baked both the cupcakes and the cake together for about 24 minutes as the directions say.

So if you really want two spice layers, bake the full amount of batter in two 9-inch pans; but increase the spices for the two layers.

From here on the directions are as in the original:

Preheat oven to 350 degrees F.
Butter and flour two 9-inch cake pans. Sift first 4 ingredients into small bowl. Stir milk and butter in small saucepan over low heat just until butter melts [I used the microwave]; set aside.
Using electric mixer, beat eggs and sugar in large bowl until thick enough for batter to fall in heavy ribbon when beaters are lifted, about 5 minutes.
Beat in orange peel and vanilla. Add flour mixture; beat just until blended. Add warm milk mixture; beat just until blended. Divide batter between prepared pans.
Bake cakes until tester inserted into centre comes out clean and cakes begin to pull away from sides of pans, about 24 minutes. Cool cakes in pans on racks 20 minutes. Cut around pan sides and turn cakes out onto racks. Turn cakes right side up.

Frost with cream cheese frosting (amounts given in the original recipe) or with cinnamon-tinged butter icing.

Photo by Ponytails.
Posted by Mama Squirrel at Thursday, September 18, 2014