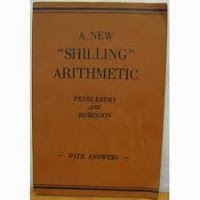 On the subject of teaching mathematics, Charlotte Mason had a few negative things to say about manipulatives. Not that she didn't use real-life objects and counters: her books mention money, beans, and dominoes, just as a start.  But she was definitely against complicated, expensive math apparatus, and, using the  textbooks available a hundred years ago, we can assume that she also did not teach with what's now called a "discovery" approach. Children were taught to understand what they were doing, as much as possible, but they were also given the information and strategies they needed rather than being expected to invent their own methods.

This is where John Mighton, JUMP Math, and recent educational research come in.

Some of the conflict we have over how to teach math comes from confusion over words, especially words like "discovery" and "rote." The problem is that, like that swinging gate that Charlotte Mason mentioned, people on either end assume that there's no middle point. Either you teach like a colonial-era schoolmaster, chanting multiplication tables for hours, or you grab onto the latest discovery-based fads and hope that the concepts will eventually click.

This is where we need to ask ourselves persistently if what we're doing...um, adds up. Mighton uses the analogy of playing chess. Some amateurs have played many, many games of chess; they can play a long time, but they don't get much better just by playing. I'm thinking also of, maybe, someone who can play "Lady of Spain" on the acccordion (or the organ), but that's all.

The opposite of this approach, according to Mighton and the research he cites, is to teach specific small sequences of moves, whether in chess, or skating, or math. If you're trying to get good at golf, you go out and work on your swing. If you're learning to type, you type jkl; jkl; jkl; as many times as it takes; then you add a couple of new keys, and so on. This is not punitive; this is not what we criticize as "rote learning"; these are the ABC's of anything. If you give students keyboards and tell them to bang away, they will not figure out for themselves that they could get faster and more skillful by typing jkl;.

So why do we assume that a tableful of carefully-designed manipulative blocks...are you listening, Herr Froebel?...will, in themselves, teach children what they need to know, no matter how long they play with them? As Mighton points out, and I have seen this confirmed myself, there are high school students who have been through this whole program of discovery-based learning and who still cannot add fractions. But when they're taken through some "guided instruction," they can and do learn what they missed earlier on. (But what a shame to have wasted all that time.)

Guided instruction is not rote learning. It doesn't mean no drawings, no manipulatives. It doesn't mean blindly following an instructional sequence like a robot. It does mean that we teach students a little bit at a time until they can do each step perfectly. Who does that remind you of?


Perfect Accomplishment.––I can only offer a few hints on the teaching of writing, though much might be said. First, let the child accomplish something perfectly in every lesson––a stroke, a pothook, a letter...
Steps in Teaching.––Let the stroke be learned first; then the pothook; then the letters of which the pothook is an element––n, m, v, w, r, h, p, y; then o, and letters of which the curve is an element a, c, g, e, x, s, q; then looped and irregular letters––b, l, f, t, etc. One letter should be perfectly formed in a day, and the next day the same elemental forms repeated in another letter, until they become familiar. By-and-by copies, three or four of the letters they have learned grouped into a word––'man,' 'aunt'; the lesson to be the production of the written word once without a single fault in any letter.  ~~ Charlotte Mason, Home Education

Linked from The Carnival of Homeschooling: Ages and Stages Edition.
Posted by Mama Squirrel at Monday, September 01, 2014

But, but, but, didn't you know, order emerges from chaos? :)

Well, some things are okay done or learned randomly, if that's their nature. But in others it seems like we waste time, actually make things too complicated, that should be taught more methodically.