Faith and art lessons, on the day of Epiphany (Lydia's Grade Eight) 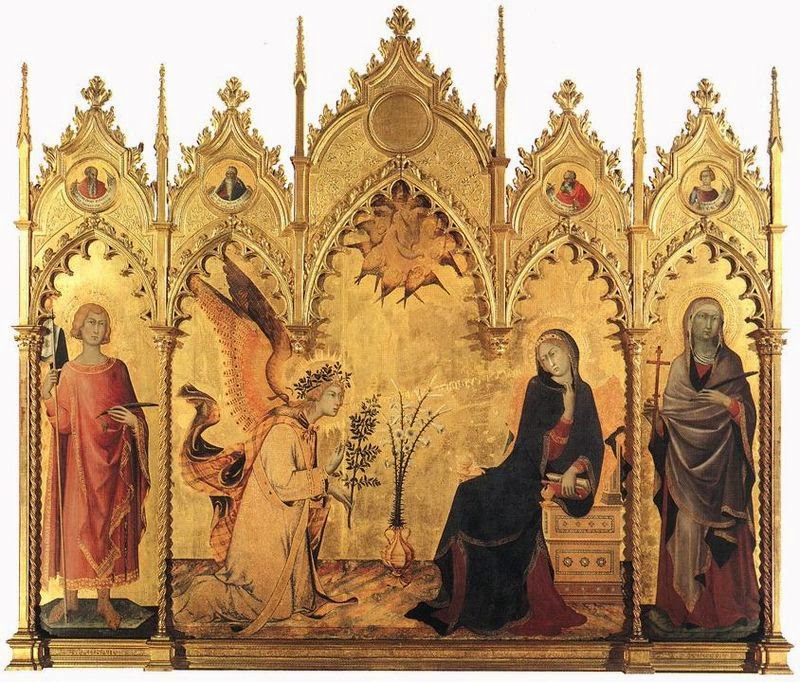 Book studied: Seeing the Mystery, by William S. Taylor. First half of Chapter 2: "The heaven connection."

Objects:
I. To explore some of the ways in which artists of the western world have emphasized the divinity of Jesus by:--
(a) Interesting the student in the general subject by a comparison of The Annunciation and Two Saints by Simone Martini and L. Memmi, and The Holy Night (also called Nativity) by Correggio, both of which used angels to demonstrate the virgin birth
(b) Discussing other means of showing divinity
(c) Linking Christian faith with art

II. To form a new relation with the past and with art.

III. To provide food for the imagination.

Lesson.
Step I.—Read the passage on pages 28 and the beginning of page 29. Look at the Martini/Memmi portrait before reading about it, noting anything unusual about the figure of Mary herself, her posture, what emotions she appears to be expressing.  Also notice the figure of the angel: his general appearance (is he very angel-like?), and his position relative to Mary (surprising?).

Step II.—Look at the Correggio painting, particularly the various legs shown! How do the angels appear in comparison to the humans in the painting?  Read the passage on page 32, describing a different depiction of angels.

Step III.—As another example of means of portraying divinity, read the passage about the use of position and about halos, using paintings by Raphael and Lochner as illustration.

Step IV.--Using any art books or Christmas cards that we have available, look for other examples of angels, the relative position of God/angels/humans, or the use of halos to show Christ's divinity. Which do you think are the most effective technques? Are there any you can think of that we have not covered yet?