Picture Talk: The Adoration of the Magi (Lydia's Grade Eight) 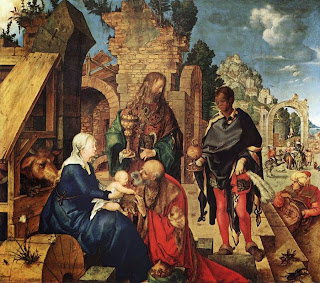 Dürer's Adoration of the Magi
Step 1.-- What do you know about Albrecht Dürer? ("Albrecht Dürer was a German painter with far reaching influence whose travels through Europe, including Italy and the Netherlands, gave him prominent success in printmaking and engraving. Renowned as one of the best artists of old master prints; his works were intensely religious and iconic." Virtual Uffizi)

Step 2.-- History of the picture.
The Adoration of the Magi is a 1504 oil on wood painting by Albrecht Dürer. It was commissioned by Frederick the Wise for the altar of the Schlosskirche in Wittenberg, the same place that Martin Luther would nail his theses to the door thirteen years later (and where Luther would be buried).  It is considered one of Dürer's best and most important works from the period between his first and second trips to Italy (1494-5 and 1505). It is no longer in the church, because a century later it was given to the Holy Roman Emperor for the imperial art collection in Vienna, and later it was put in the Uffizi gallery in Florence.
.
Step 3.--Studying the picture for several minutes, then describing it. (Impressions of the weather? What sorts of colours? How are people clothed? What is the baby doing? What is the servant doing? Is there anyone missing from the picture? Placement of the people, anything unusual? What geometric shape does their placement form?)  One funny note: one of the Magi is painted to look like the artist.

Step 4.--A few thoughts:  In 1494/1495, Albrecht Dürer spent time in Italy, and this painting reflects both the Northern (German, Dutch style) attention to detail and a "typically Italian perspective."  It also shows how Dürer was using some of the colours that he had seen used by painters in Venice such as Mantegna and Bellini. It is considered his first masterpiece.

Step 5.--Can you draw the chief lines of the composition?