Poetry readaloud: the Walt Whitman texts that are used in Ralph Vaughan Williams' A Sea Symphony.

Finish reading The Merchant of Venice.

Exploring the World Around You, Chapter 10: "Population Growth and Control.' "After about four years of such population growth, the lemmings begin their famous mass migration toward the sea...when they reach the coastline, they plunge into the water rather deliberately and swim out into the Atlantic Ocean." 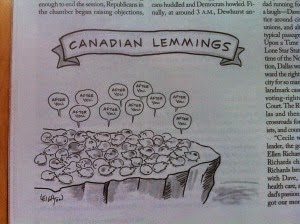 Canadian Lemmings cartoon found here. They're saying "After you" "After you."
How to Read a Book: finish the chapter "Agreeing or Disagreeing with an Author."


"A person who has read widely but not well deserves to be pitied rather than praised. As Thomas Hobbes said, 'If I read as many books as most men do, I would be as dull-witted as they are.'" ~~ Mortimer J. Adler, How to Read a Book

Read  Larry Rothe's article "The Vaughan Williams Brand" and then listen to some of A Sea Symphony (CD from the library).
Posted by Mama Squirrel at Friday, February 06, 2015