Wednesday Hodgepodge: Home Away from Home

Note from Mama Squirrel: I will be away from the Treehouse and will have limited computer access for the next few days. If I don't respond to a comment or visit you back, that's why.

Notes from our Hodgepodge Hostess: "First things first...there will not be a Hodgepodge next week because whoohoo! I'm moving! It's only been 13+ months since we got started, but it looks like moving day is finally here. I will do my best to post a Hodgepodge the week after, but that may be dependent on the Internet fairies. I will post something so you'll know, but for now plan on no Hodgepodge Wednesday Nov 2nd, hopefully a Hodgepodge on Nov. 9th, and definitely a Hodgepodge on Nov. 16th. This week though, there is a Hodgepodge and here are the questions. Answer on your own blog, then hop back here tomorrow to share answers with all your friends and neighbors."

1. Besides your very own house, describe a place where you feel most 'at home'?

I had a strange experience years ago (maybe harking back to last week's question about the sixth sense). One summer during university, I took a job at a camp just outside of the town where I grew up. I had actually started the summer working at a different job, but left it to take the camp job. I got up early on one of the first mornings I was there, and was just enjoying being outdoors wearing shorts, and not in an office wearing pantyhose, and I had a sense of being where I was supposed to be, of feeling at home. Soon afterwards I was talking to my grandmother, and she said that the land now owned by the camp was part of the farm where she lived as a young child. Maybe it was just a coincidence, and anyone would have felt equally happy to be out there in the country on a summer morning. But I've always thought there was something more to it than that.

2. When did you last 'hit a home run' with something? Explain.

Big things, small things? I think the last big thing was the conference talk I gave in Texas, that seemed to just grow until it was done. Right now I am finishing up the final wording of a shorter talk, on a topic that I know more about, that should have been easier to put together; but with this one it's felt more like a few pop flies and then a very slow trot, one base at a time.

3. Tell us about something you love in your house or kitchen that is 'homemade'.

That's almost too big a question, because we have a lot of homemade things here. Our house itself was built fifty-plus years ago by Mr. Fixit's grandfather, along with friends and family who were in different trades like bricklaying and masonry. The fake wood graining on all the inside doors was done by hand, with a special tool. (Grandpa might have enjoyed some of the decorating DIY that goes on these days.)

We also have furniture that Grandpa built, since that was also one of his skills along with building cupboards and putting in floors. The hall console that holds our holiday decorations was one of his projects.

4. 'A man's home is his castle'...which of the world's ten most captivating castles (according to The Travel Channel) would you most like to visit and why-


You had me at the word "castle." I have made it my personal mission in life to get everyone to give Ivanhoe a try. So, Scottish castles first, and then English if there's time.

5. What's a recent or upcoming plan or project that's required you do a little homework before getting started? Did the homework cause you to abandon your plan or adjust it in some way?

Yes, there have been lots of them, but my brain must be fuzzy this morning because I can't come up with one specific one.

6. In your opinion, is homework an unnecessary evil or a valuable practice? Should schools be done with homework? Why or why not?

Tough question, and I'm somewhere in the middle. I do have a different perspective on this because we homeschooled through elementary, and if I gave someone an independent assignment, like reading a book, I wasn't always sure if that would qualify as "homework," especially if they decided to work on it in the off-hours. Let's just say I am in favour of giving some independent work, but not of making students work for hours and hours, especially if the material hasn't actually been covered in class. But I do think the opposite approach is interesting, too, if it's used right: having students watch a teaching video online, at home, and then use the class time for what would have been "homework," with easy access to the teacher.

Scooting down Main Street Hill on my vintage (no handbrakes) bike. Very dangerous, but fun all the same. 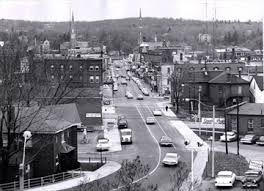 I'm up here, you're down there.

Like being at the top of Main Street Hill, I'm up in the air this morning, ready to jump on and scoot (I almost wrote Scott), but this time it will be on a VIA train instead of an old bicycle. This weekend is L'Harmas, an annual gathering of Charlotte Mason educators, readers, and thinkers, and I am leaving early to meet up with some friends at a "home away from home" (not a castle, though). Hopefully it will all be a home run.

Linked from the Wednesday Hodgepodge at From This Side of the Pond.
Posted by Mama Squirrel at Wednesday, October 26, 2016

How wonderful that you live in a home with so many handmade treasures. North Americans are a transient breed in general, we don't hold onto things including homes. It's sad but true. I can't think of one acquaintance that is living in a home that has been pasted down. I wish my grandparents had passed down a little lake cottage, it was my happy place growing up.
Cheers!
Lori in Blue Ridge, GA