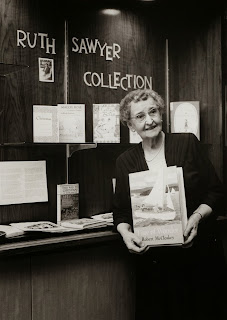 Maggie Rose, Her Birthday Christmas, by Ruth Sawyer, 1952.  Pictures by Maurice Sendak.  Our copy is ex-library, found at the big annual booksale four years ago (I know because the blog says so). Spoilers Included.

Most reviews will say this is a story about people, and it is. But it's also a story about place: life in a somewhat isolated part of Maine, as it was sixty years ago.  There are coves and boats, clams and wild berries, summer cottagers...and tramps.  More on the tramps in a minute.

The lifestyle of Maggie Rose's large family is summed up like this:  "Every autumn, when cottages were being closed, the occupants had a way of saying: 'Better give this stuff to those Bunkers.'"  The parents and older children whistle-while-they-don't-work, almost to the point of stretching credulity.  (Maggie Rose bought diapers herself for the baby?)  But this is not a Cinderella, make-Maggie-Rose-slave scenario; the rest of the family are irritated by her initiative, and suggest that her constant begging to improve things is a slap in their family face.

Maggie Rose is not discouraged by the lack of parental support; she has other adults around her, including a storekeeper and a teacher friend, who try to help her out without overstepping.  With their encouragement, she finds ways to make some money over the summer, with the grand idea of hosting a neighbourhood party on Christmas Eve. (Christmas Eve is her birthday too.)  But because she has to hide her hard-earned loot in a tree (her family are well-meaning but can't be entirely trusted), it gets stolen by a tramp.

No, life isn't fair.  Yes, there is a lot of evil in the world.  However, the robbery is the needed kick in the pants for Maggie Rose's family to get busy and make up for her loss.  And they had better hurry, because Christmas is coming.


"Tim said: 'Never seen anything like it before.  I'd call it plain handsome.'

'It was Maggie Rose who spoke last:  'It's a place fitten to celebrate a birthday Christmas.  And I'm thinking of His.'"

Merry Christmas to you all. xx