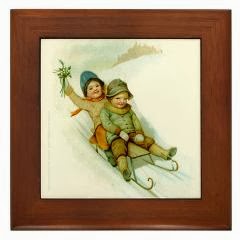 "Two days till Christmas Eve  And school was already out for the holidays, and there was plenty of snow for sliding....Margret had so much work she was almost out of her mind, for the new calf turned out to be terribly backward about learning to drink from the pail.  But it was always like this before Christmas--with everybody having too much to do and nobody knowing how he was ever going to manage to get everything done.  If it were not like that, it would not have been a real Christmas."

"Joey and Hans Ulrich [were] singing, humming, or whistling incessantly, 'Christmas is coming, Christmas is coming, tomorrow will be the day!'  'It isn't tomorrow at all,' the sisters would complain all day long.  'Stop that awful noise, it's driving us mad.'  'All right, if you feel that way about it,' the boys retorted.  'Then we'll go to the barn; at least the calf appreciates music.'  'You leave my calf alone, you pests,' Margret called after them, and they called back, 'All right, then we'll go sliding again.  Our pants are soaking wet anyway.'"

"They slid down the slope, they ran to the stone bench a hundred times and looked for the letter carrier, because Margret had said there would just have to be another card from Father as a Christmas present for Mother, and the boys were eager to be the bearers of this Christmas present.  It was the twenty-second already, so if a card were to come at all, it was about time.  But there was no sign of the letter carrier.  Or was there?"  ~~all from Margot Benary-Isbert, The Ark