It's Advent Not Christmas, Day 13: On God's Trail 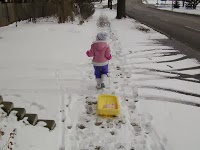 "Suddenly I remembered one of their legends about a man who had become an ant.  He had been sitting on the trail after a hunt and had noticed some ants trying to build a home.  He'd wanted to help them make a good home... But because he was so big and so unknown, the ants had been afraid and had run away.

"Then, quite miraculously, he had become an ant.  He thought like an ant, looked like an ant and spoke the language of an ant.  He lived with the ants, and they came to trust him....It was a perfect parallel for what God had done in Jesus....So I took the word for 'becoming like an ant' and used it for incarnation.  'God is incarnated into man,' I said.

"They gasped.  There was a tense, hushed silence....

"'Where did he walk?' the witch doctor asked in a whisper.

"My blood was racing, my heart pounding.  'Jesus Christ is God become man,' I said. 'He can show you God's trail."

Email ThisBlogThis!Share to TwitterShare to FacebookShare to Pinterest
Labels: It's Advent Not Christmas