Christmas Countdown with Charlotte Mason, Week 9 of 12: Love is a light that rises in the darkness 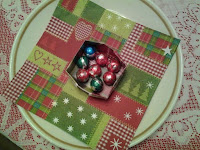 Here is this week's passage from Charlotte Mason's book Parents and Children. It's one very packed paragraph, which I've broken up for readability.


"The Altruistic or Egoistic Direction––This [previously discussed idea], of the sensations, is only one example of the altruistic [concerned for the welfare of others] or egoistic direction which the various operations of a child's complex nature may receive.

His affections, again, are capable of receiving a subjective [self-focused] or objective [other-focused] direction, according to the suggestions which reach him from without.

Every child comes into the world richly endowed with a well of love, a fountain of justice [justice will be discussed next]; but whether the stream of love shall flow to the right or the left, whether it shall be egoistic or altruistic, depends on the child's earliest training.

A child who is taught from the first the delights of giving and sharing, of loving and bearing, will always spend himself freely on others, will love and serve, seeking for nothing again;

but the child who recognises that he is the object of constant attention, consideration, love and service, becomes self-regardful, self-seeking, selfish, almost without his fault,

so strongly is he influenced by the direction his thoughts receive from those about him."

In the spirit of Charlotte Mason:

Miss Mason's passage can be used, of course, as advice on the training of children.

"When Mary Lennox was sent to Misselthwaite Manor to live with her uncle everybody said she was the most disagreeable-looking child ever seen. It was true, too...She never remembered seeing familiarly anything but the dark faces of her Ayah and the other native servants, and as they always obeyed her and gave her her own way in everything, because the Mem Sahib would be angry if she was disturbed by her crying, by the time she was six years old she was as tyrannical and selfish a little pig as ever lived." ~~ Frances Hodgson Burnett, The Secret Garden

But remember that she began the chapter as a lesson also to the hearts of adults. We take inspiration from the lives and words of others, real and fictional. Yesterday our pastor preached on Paul's letter to the Philippians:


"2:25 Yet I supposed it necessary to send to you Epaphroditus, my brother, and companion in labour, and fellowsoldier, but your messenger, and he that ministered to my wants...

"2:28 I sent him therefore the more carefully, that, when ye see him again, ye may rejoice, and that I may be the less sorrowful." (KJV)

How beautiful to be called someone's "companion in labour" and "fellowsoldier!" When we turn love outward, we also share in others' joy. How fortunate children are who grow up knowing not only that they're loved, but that they can love. But like Mary Lennox, starting badly does not mean we are doomed to practice tyranny and selfishness for the rest of our lives. Growth can come a little at a time.


"...if you pour yourself out for the hungry and satisfy the desire of the afflicted, then shall your light rise in the darkness and your gloom be as the noonday." (Isaiah 58:10, ESV)

Things to do this week:

Even if you prefer a slow start to Christmas planning, it seems legitimate now to go buy candy canes, pull out the old CDs, or do whatever you do at the beginning of December. Church concerts are happening; a couple of cards show up in the mail; Advent devotionals and Jesse Trees begin.

In the 1977 world of Family Circle Christmas Helps, "4 Weeks Till Christmas" was a week to be painting cookie jars, screen-printing cushions, turning Styrofoam cones into the Three Kings, and baking salt dough into "whimsical angels." Obviously the problem of trying to keep up with Pinteresty over-expectations is not a new one.

Here are a few less complicated ideas. Make a pot of potato or split pea or vegetable soup (a stone is optional), and invite someone to share it with you. Make holiday origami or cards from upcycled paper; or buy some beautiful new paper or cardstock, and use it with imagination and love. Drink some tea that smells interesting and seasonal. Work on a holiday letter, if that's your thing. Spend time with someone who's not having such a good time. Contribute in whatever way makes sense to a homeless shelter, sock or coat drive, or other project that keeps people warm and fed.
Posted by Mama Squirrel at Monday, November 27, 2017

Love this. Wow. You gave me several things to think on. I'm going to go back and read all the Christmas with CM posts I missed soon.