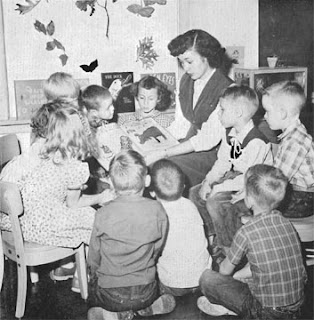 You get the bonus first this time!  The photo above was found on this website, where (along with other nice photos), there's a 1955 list of then-recent "science books for children," taken from the Kansas School Naturalist.  And if you back up on the website, there are other issues of the magazine, some as early as that one, some much later.  They can be read online or downloaded in PDF format.

We went to the annual end-of-October rummage sale, in the last hour when you get to fill a bag.  So if these finds seem somewhat eclectic, miscellaneous, weird, it's because I just put in anything that looked like it had potential.  Very unusually for this sale, and especially in the last hour, they had LOTS of books, so that's mostly what I got.  Dollygirl dropped in some dolly stuff too.

A very nice Dayrunner Collegiate Organizer, something I needed (I am between planners at the moment)

The World is Flat, by Thomas L. Friedman

Penny, by Hal Borland (about his basset hound)

A Book of Country Things, Told by Walter Needham, Recorded by Barrows Mussey

A Nature Book: Activities and Projects For Children, by Helen Jill Fletcher, 1954 (the inside title page calls it just The Nature Book)

Yet another copy of Poems and Prayers for the Very Young

Extra copy of The Daughter of Time

My First History of Canada, by Donalda Dickie (OOP classic)

And a few Scholastic books:
What Do They Do When It Rains?, by Norman Bridwell, TW 1487
Georgie and the Robbers, by Robert Bright, TJ 1511
Little House in the Big Woods, TX 1983 (did you know the Little House books were done in older Scholastic versions? I didn't.)

(All this, plus Dollygirl's stuff, came to $4 plus another 50 cents for the bag.  I think it was money well spent.)
Posted by Mama Squirrel at Saturday, October 26, 2013