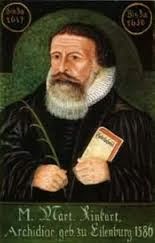 Pastor Martin Rinkart is one of my all-time Christian heroes.

I found these thoughts by David Shibley on the CharismaNews website.

"The Year of the Great Pestilence (1637) saw every pastor in the city except Rinkart succumb to the horrific conditions. As the sole surviving clergyman in Eilenburg, it fell upon Rinkart to conduct funeral services for up to 50 people per day. In May of that terrible year, Rinkart’s own wife died.

"Rinkart lived in a world palled by death and despair. Yet his faith in Christ held firm. He did not give in to bitterness. Even after living through three hellish decades he never lost his confidence in the goodness and faithfulness of God.

"Pastor Rinkart could identify with Job. After losing his family, his health, his money and his position in society, Job still declared His trust in God: “Even if He kills me, I will hope in Him” (Job 13:15, HCSB). Martin Rinkart profoundly understood Jeremiah’s unflinching faith. Looking on a scene of collapsed hopes and a privileged nation that now lay pillaged, Jeremiah still declared, “The steadfast love of the Lord never ceases, His mercies never come to an end; they are new every morning; great is Your faithfulness” (Lam. 3:22-24, ESV).

"How did Pastor Rinkart keep his faith and his sanity? He refused to be defined by his circumstances. He determined to focus, not on his circumstances, but on the unchanging character of a merciful God."
Posted by Mama Squirrel at Sunday, October 13, 2013

And he wrote that wonderful hymn, Now Thank we all Our God. Amazing.