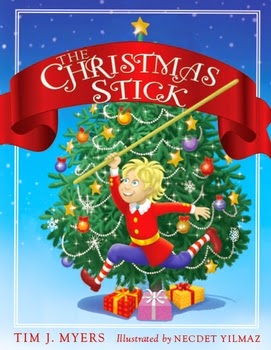 What bad things could one say about a well-illustrated picture book that promotes low-tech, natural playthings for somewhat spoiled princes (and princesses)? Not many.

The prince (he's nameless) receives a lot of toys one Christmas that move by themselves, don't offer much scope for the imagination, and end up broken before too long. His grandmother, on the other hand, gives him a long stick, which (as you can guess) becomes his favourite plaything. In an interesting twist at the end, the prince finds a way to pass the gift on, having learned the intended lesson. Or maybe it wasn't a lesson. Maybe his grandmother just wanted him to have fun.

Taken on its own terms, The Christmas Stick is a cute story, and yes, it does have a message of simplicity (though nothing specifically about the Christian meaning of Christmas). But is it the princes (and princesses) themselves who need this message, or their parents and other lavish gift-givers? The fact that the prince never gets a name, for instance, creates a certain distance, makes him a bit less real; and the thought that the story might just be propaganda for fewer toys (and more wrapped-up sticks) might not go over well with some kids. The difficulty is not that we don't remember and acknowledge instances in our own lives when simple playthings won out; it's just that slightly defensive feeling that we, the parents, are getting a sermon here on the appeal of long sticks.

But maybe it wasn't intended that way.  Maybe the author just wanted us to have fun too. And in that case, I'd give this enough Christmas stars to pass it on to some little ones I know.

Please note that families who do not allow talk of wizards etc. will find a few references in this book offensive.

I was sent a complimentary copy of this book from the publishers, for review purposes, but  received no other compensation.
Posted by Mama Squirrel at Wednesday, November 05, 2014