From the archives: Making it Christmas

This post is not about the spiritual side of Christmas, because that part of Christmas...the real, Joy-to-the-World Christmas... is there no matter what. This is more about the fun stuff:  the gifts, the food, the trimmings.  The things that take time, take money, or just take thought.

These are not necessarily--in fact they're almost never--the same as the things that are advertised.  They're certainly not along the lines of "buy her a diamond for Christmas."For some people, Christmas trimmings are new window blinds and ginger beer.


Marjorie Gibson is another Guyanese who believes that Christmas in the USA cannot even come near those she experienced in Guyana.

“In Guyana you would get up in the morning and look over at your neighbour to see what type of blinds (curtains) they put up, if they have new ones. Here the blinds could be up for the whole year and it does not matter,” Gibson stated....“We do have all the traditional Christmas food," [said Marilyn Harper.] "I try to make Christmas the way I remember it in Guyana. I have everything, my ginger beer, sorrel, the black cake as usual and everything.”--"U.S.-based Guyanese Dream of Christmas in the Motherland"

What has inspired your ideas about how to make Christmas?  Or what a really good Christmas would be...realistic or not?For years, people said "Dickens' Christmas stories."  Plum pudding, holly and all that.  But I think in more recent years a more common answer has been the Little House on the Prairiebooks, slightly ad nauseum. Tin cups, mittens, and a stick of candy, and they were so happy!  For those who didn't bother to read the books, there was always that oh-so-sweet first-season T.V. episode.  And it is a classic, I admit.


Christmas is for children. But it is for grownups too. Even if it is a headache, a chore, and nightmare, it is a period of necessary defrosting of chill and hide-bound hearts.--Lenora Mattingly Weber

However, much of Mama Squirrel's holiday inspiration has come from a smaller, stranger assortment of books and even magazine articles.  One was a Focus on the Family Magazine article, saved from a time before the Squirrellings were even thought of; it was an adaptation of the Advent and Christmas chapters in Together at Home, by Dean and Grace Merrill.  One was The Light at Tern Rock, about Christmas spent in a lighthouse. Another was Carolyn Haywood's Snowbound with Betsy.Okay, okay, Mama Squirrel has never quite grown up?  But apparently I'm not the only one who fondly recalls the part where Betsy and the other snowbound children rummage through the storeroom for anything that might make good Christmas gifts.  They come up with all kinds of kid-made crafts, and then have a sort of bazaar and do their "shopping."

In The Light at Tern Rock, those who end up using a trunkful of stored-up holiday plunder aren't there by choice, but because of a trick by the man who filled up the trunk in the first place.  But never mind about the deceitful lighthouse keeper for now...it's the trunk that interests me, and it's an image that often comes to mind when I'm storing away things like the cans of cranberry sauce I bought on sale today, or a package of candles, or a crocheted bookmark.  Who's the bookmark for?  Sometimes I don't even know...I just keep filling the pantry shelf, and the box under the bed (or wherever it is), here and there.  Then it's just as much fun pulling everything out again and figuring out:  yes, there's enough chocolate for Quick Fruit and Nut Fudge...I still have lots of that blue yarn, enough to make a quick pair of slippers (yes, I do know who those are for)....I saw some cool plaid ornaments in the Chapters Christmas flyer, and I bet I could make something like that with the felt and Wonder-Under in the craft stash...Everyone's "box" is different.  For one family, it's filled with MCC and World Vision catalogues, the ones where a donation pays for goats, soccer balls, clean water.  Their children spend days figuring out what they can give this year.  (Definitely beats the big gimme catalogue.)And if you get to December and the box is still too empty to look like Christmas?Then you read, or re-read, Little House in Brookfield (not the abridged version, please) and give thanks for Christmas bread.  Sing a few choruses of "Christmas Day is in our grasp, So long as we have hands to clasp." And maybe read this practical post by the Prudent Homemaker: Christmas on a Zero Budget. 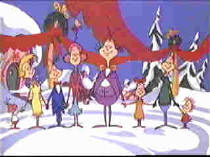 As a postscript to this, there's one other magazine article I saved from several years back.  It also appeared in the Chicken Soup books, and I found a version of it online.  It's about a mother and two little girls who were given a Christmas food box during a difficult year--but the girls, not understanding how "poor" they were, decided to give the whole thing away to a neighbor who was even worse off. ("Even her dog was sick.")  The mother's immediate reaction was "Stop! You're giving away our Christmas!"  Then she thought again: no, that is how you make it Christmas.


Gifts of time and love are surely the basic ingredients of a truly merry Christmas. - Peg Bracken.
Posted by Mama Squirrel at Monday, November 14, 2016