Eyes Open in Advent (Book Review of All Creation Waits) 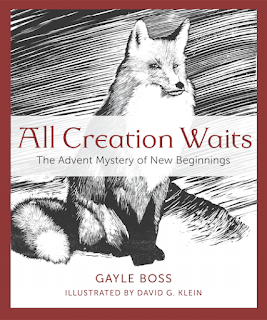 "Every single creature is full of God and is a book about God. Every creature is a word of God. If I spend enough time with the tiniest creature, even a caterpillar, I would never have to prepare a sermon. So full of God is every creature." ~~ Meister Eckhart, quoted as a preface to All Creation Waits

In his review of All Creation Waits, writer Brian Doyle refers to it as a "sidelong" book, which I take to mean indirect, something like a parable. In twenty-five short readings, accompanied with woodcut illustrations, Gayle Boss takes you on an early-winter walk around Lake Michigan, with stop-offs to visit skunks, foxes, porcupines, and other local inhabitants. What are they doing at this time of year? As "all creation waits" for the Advent of the Saviour, animal activities are lyrically described, but without much added-on interpretation. This is not a book of prayers or Scriptures; the animals are not analogies; they do not think of much beyond shelter and food, and they have no imagined sense that Christmas is coming. It reminds me more of Prayers from the Ark, or some of the Christmas readings that take the viewpoint of the cow and the spider; or the muskrat scene at the beginning of The Long Winter.

A sample from the chapter "Whitetail Deer":


"Gliding through the woods in groups of two, three, or four, their coats the color of brush and bark render them nearly invisible to us. So when, in October, we see herds of them out in the open, it seems a curtain has been pulled back on a secret society. They know the cold is coming. Banding together against predators, they forage widely in the fields before their food freezes, or vanishes under snow.

"But then, a drive deeper than feeding seizes them. By November both bucks and does, restless, verge on reckless. Trumping food and wariness, the primal urge to reproduce one’s self and one’s kind surges with the winds of the coming, killing cold."

This book would be most suitable for families with children, who perhaps are looking for something non-commercial but also not directly Bible-related for Advent reading times. [One possible note of caution: there are occasional references to mating which might or might not be appropriate for some families.] It could be useful for homeschoolers, or for those who need a set of readings for less-usual, out-of-church situations. It is a good reminder that the animals are (still, thankfully) all around us. Their stories are a (sidelong) glimpse of the way God creates and sustains them--and us.

Statement of disclosure: I received a complimentary e-copy of this book for purposes of review, but I was not otherwise compensated for this review. All opinions are my own.
Posted by Mama Squirrel at Tuesday, November 08, 2016