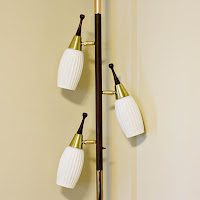 Some things that come up on Pinterest lead to other interesting links, and often those are the ones that make me scratch my head.

The list starts with:
and goes on through some-people still have-them such as:
and

I suppose it just depends where you live and what you do, and who your friends are and what they have in their houses. Having grown up in the '60's through the '80''s, there are things that I remember being in "everybody's" house back then but don't see now: ash trays (large and small) in the living room, cable T.V. boxes wired to the (usually floor-model) T.V., floor lamps with three bulbs, step-stools, chord organs, and spring-loaded phone directories.

However, I know plenty of people who own and use landline phones, sewing machines, and bar soap, among other things. If you climb up to our Treehouse, you will find a number of other curiosities such as vintage radios (including CB's) and an electric coffee percolator. And paper newspapers, magazines, and books.

Yes, the world is changing. But very little of that list has entirely disappeared from North American homes. Except maybe for phone books. Do you still get one where you live?
Posted by Mama Squirrel at Saturday, November 19, 2016