Do-Vember
It's just over six weeks to Christmas Day, but we're still figuring out plans. It's not a big crafting year for me; I know, I always say that and then an idea pops up and I spend all of November going from one project to another. But no, not so much this year.

I looked in the spot where we keep empty boxes and jars, and realized that somehow we had not kept most of the fishbowl-shaped canned pear jars I wanted to use for decorating. And the store hasn't had any pears lately. We might have to buy some canned beets (I am not a beet eater) and decant them. But I am not buying brand new jars just to put some tea lights in.

On our last weekend trip to Walmart, I picked up a few things that I thought might help set things in motion: the December issue of Canadian Living, which I mostly don't read the rest of the year; two packages of paper napkins; and a set of mini cookie cutters. (I already had the red basket.)  Mini cutters: I could see different possibilities for those. Cookies, biscuits, green peppers, fruit. 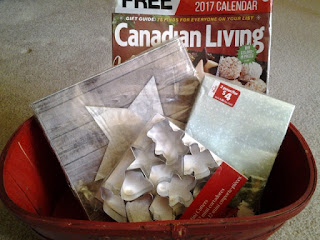 Between the magazine cover, the napkins, and the star cutter, we seem to have a bit of a star theme going. I'm good with that. 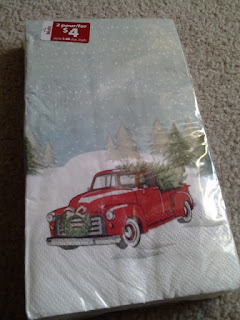 I just really liked the vintage truck and Christmas tree on these ones! 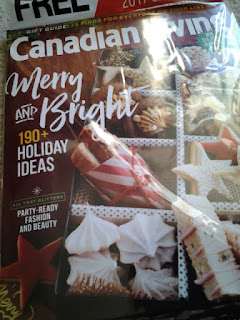 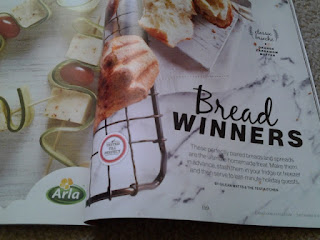 This isn't much of a year for cookies, either. But an article about bread...rolls, pizza dough, things like that--that's different enough to get my outside-of-Pinterest creativity happening.

Now, if Rold Gold would just bring back their white chocolate star pretzels, life would be perfect.
Posted by Mama Squirrel at Tuesday, November 15, 2016