The past week has meant ultra-cold temperatures all over the place (unless maybe you're in Australia), which is not good for people, heating bills, water mains, and vehicles.  Our van had a leak in one of its tires, with the weather at least partly to blame.

We discovered this early Saturday morning, but the only tire-fixer at the nearby shop had called in sick, and they asked us to wait until Monday.  After keeping it pumped up long enough to handle Saturday groceries and Sunday church, Mr. Fixit was worried enough to take it into the Big Tire Chain on Sunday afternoon, but it turns out they're not a warranty dealer for our brand of tires, and the tire was still fairly new.  So on Monday Mr. Fixit went to the other shop and got a new tire for the van, free under the warranty but paying the service charge to put it on.  He drove away to run another errand, but when he came out to the van he noticed there was no little cap on the tire, where you pump it up.  He went back to the shop and inquired about the missing cap, and was told that Caps Are Now Extra.  No way.  He further inquired where the cap to the old tire might be.  The tire-fixer had to fish through the trash can to find it, but we got it back. So there's our automotive frugal tip for the week, which also applies, unfortunately, to other businesses these days:  don't expect even small things to come gratis.  Ask to make sure. 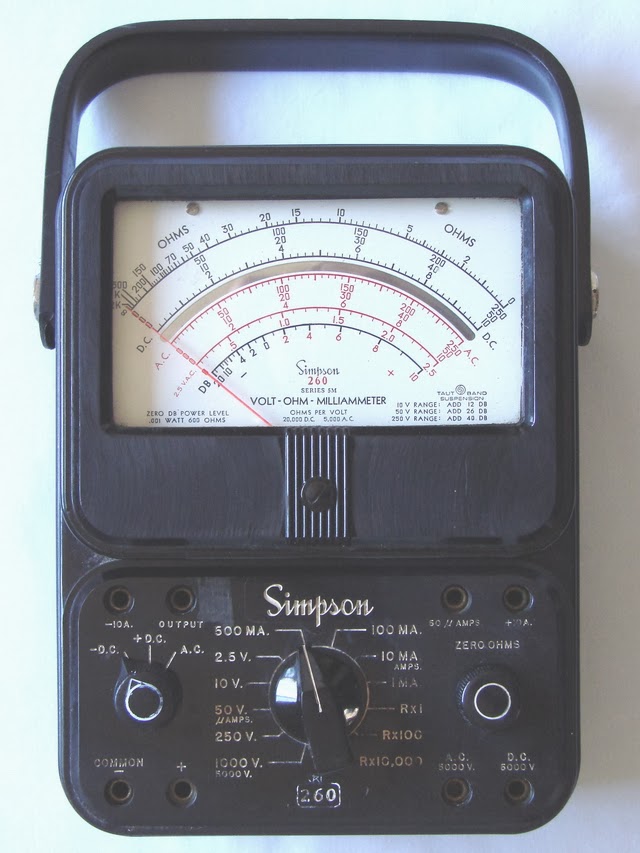 Mr. Fixit has a 1958 Simpson 260 analog multimeter (their photo) that he got free over thirty years ago when his high school shop class went digital.  (He says most of the digital meters got blown within a year, and the school had to re-replace them.)  He used to use it a lot with older cars, but it had been pretty much set aside for the past decade.  Recently his newer, digital meter (the second in the past few years) quit on him, and he decided to resurrect the Simpson.  After cleaning it and replacing its batteries, he used it to test the voltages in a radio he was repairing, and he says it still works well.

Mr. Fixit also negotiated a slightly better deal this week with our Internet provider.  We were considering switching, so the company offered us a please-stay incentive.  That was supposed to kick in today, so there's not much so far to say about whether what we're getting is really faster or better.

From this Treehouse it seems like food prices are going up again.  We are trying hard to make the most of what we have, use leftovers, cook up bits and pieces.  This week we had a lot of ground beef in the freezer, so we've had both lasagna and Mexican Potato Casserole, which we found in Company's Coming Kids: Lunches, but which is almost identical to the one on the Mennonite Girls Can Cook website, and they say they got it from a church cookbook.  So it seems like one of those recipes that's made the rounds.  You coat cut-up potatoes in melted margarine and taco seasoning and bake them in a casserole; then, about ten minutes before serving, you add browned ground beef mixed with salsa and chopped peppers, and cheese on top. I just used the amounts of everything that we had on hand, including homemade taco seasoning and mild Cheddar instead of Jack cheese, but we thought it was pretty good.  (The recipe says not to peel the potatoes, but we prefer them peeled.)

We also made pizza on the weekend, using bread-machine pizza dough; a batch of granola; and I turned a cupful of mashed sweet potato into two dozen half-size muffins.

Finally:  Mama Squirrel was browsing through a particular money website and blog, and came across a post about holiday spending.  The author described what their family had spent on gifts and so on, and then other people commented and shared some of their "holiday totals."  The most common comment was something like, "Yes, we have a set budget for our Christmas gifts, entertainment etc., and it can't total more than X." And that would have been fine, except that X, for our family, would be an astronomical amount. And though in general that would not surprise me at all, these are people who read and comment on a financial, money-saving blog.

Which makes me worry a lot about the people who don't read money blogs.

What do you think?
Posted by Mama Squirrel at Thursday, January 09, 2014

I too think that food prices are going up. I made a grocery price list in 2009 to help me know what the best sale prices were. I still try to buy at those sale prices because the regular prices are so much higher than that 2009 list. I've been saving my stash of receipts to make another price list and also to itemize exactly what I buy.