The school boards got the message: today all the schools are closed. 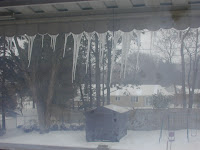 So if you're looking for something to do, I've re-posted a snowed-in books quiz that we posted several years ago as part of a Carnival of Homeschooling.   (The photos are also from that post.)  Here are eleven cold and snowy excerpts from children's books--without authors or titles. Can you name the books? Answers are posted here.

“Hush now, lad,” said Aunt Nan.
“You will have to wait until spring.
Nothing can get over
the mountains now, not even the mail.”
“No mail all winter?”
John asked.
“That’s right,”
Old Joe said. (2) 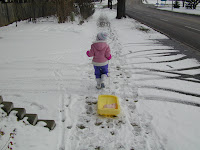 It was growing darker every minute and what with that and the snowflakes swirling all round him he could hardly see three feet ahead. And then too there was no road. He kept slipping into deep drifts of snow, and skidding on frozen puddles, and tripping over fallen tree-trunks, and sliding down steep banks, and barking his shins against rocks, till he was wet and cold and bruised all over. The silence and the loneliness were dreadful…..[He said] to himself, “When I’m the King of XX the first thing I shall do will be to make some decent roads.” (3)
By the middle of the pasture, the flakes were falling thicker. Now the wind drove Irene along so rudely she had to hop, skip, and go helter-skeltering over the knobby ground. Cold snow sifted into her boots and chilled her feet. She pushed out her lip and hurried on. This was an important errand….[The wind] swept up and scattered the fallen snow, got in front of Irene to keep her from moving ahead. Irene turned around and pressed on backwards. (4) 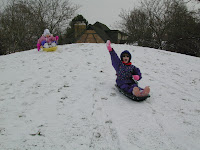 “On the little that could be seen of his face behind some unusually white-looking whiskers there was a mixture of surprise and excitement as he took in the sight which met his eyes. Overnight a great change had come over the weather. Whereas the day before had been mild, almost spring-like for early January, now everything was covered by a thick white blanket of snow which reached almost to the top of his Wellington boots.” (5) 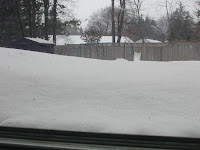 [She] stood at the little window looking out in wonderment, for the snow was beginning again, and the thick flakes kept falling till the snow was up to the window; and still they continued to fall, and the snow grew higher, so that at last the window could not be opened, and [they] were shut up fast within the hut. (6)

In most places the snow was still hardly lying at all, for the wind kept catching it up off the ground in sheets and clouds, and hurling it in their faces. And round their feet little eddies of snow ran about as you sometimes see them doing over ice. And, indeed, in many places, the surface was almost as smooth as ice….Fighting her way forward with hood up and head down and numb hands inside her cloak....the only things she thought about were her cold hands (and nose and chin and ears) and hot baths and beds at Harfang. (7)

The ladder was his only hope, and yet there was so much more work to do….It was not much later when the wind began howling through the dark woods and fine flakes of snow whipped through the branches of the oak. Indoors it was warm and cozy, and to take his mind off his misery Warton decided to play a game of solitaire. (8)

The rest of the fieldmice, perched in a row on the settle, their small legs swinging, gave themselves up to enjoyment of the fire, and toasted their chilblains till they tingled; while [their host], failing to draw them into easy conversation, plunged into family history and made each of them recite the names of his numerous brothers, who were too young, it appeared, to be allowed to go out a-carolling this year, but looked forward very shortly to winning the parental consent. (9) 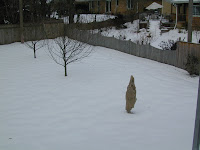 "We'll be lucky if we each get one present," said Susan. "Maybe we won't get any present at all," said Neddie. "Maybe Santa Claus won't be able to come, because it's snowing so hard...." "That doesn't make any difference to Santa Claus," said Betsy. "He always comes. Come on, let's help Santa Claus. Let's make presents." (10)