Lydia's Grade Eight: Today we are listening to Wagner's Lohengrin

"Even the feeling of "unremembered pleasure"--for it is possible to have the spring of association touched so lightly that one recovers the feeling of former pleasure without recovering the sensation, or the image, which produced the sensation, but merely just the vague feeling of the pleasure, as when one hears the word Lohengrin and does not wait, as it were, to recover the sensation of musical delight, but just catches a waft of the pleasure which the sensation brought--intangible, indefinite as they are, produce that glow of the heart which warms a good man to 'acts of kindness and of love,' as little, as nameless, and as unremembered as the feelings out of which they spring." ~~ Charlotte Mason, Parents and Children, page 197 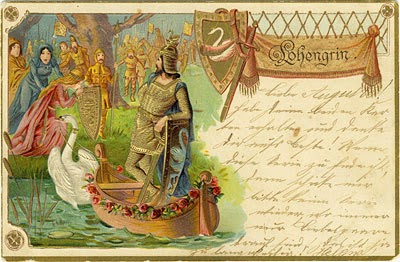 Vintage Postcards from Lohengrin! (sample above)

"I just happened to be on the same bus as a party of young German children going back after the performance and they unanimously told their teacher they had enjoyed it and said out loud their favourite moments. More tellingly the teacher told one of her charges how he had shown he could concentrate for over an hour watching an opera and now she wanted him to do that in class. There was a reply from another adult in the party – possibly not an actual colleague – to the effect that perhaps the teacher should learn to sing!" ~~ "Bayreuth Opens Up Wagner to a Younger Audience", by Jim Pritchard, at Seen and Heard International (2014)

Daily Telegraph article: "The opera novice: Wagner's Lohengrin," with one or two omissions.  You-tube video of the overture, at that link. You-tube video of Elsa's Procession to the Cathedrral.  And the Wedding March!  This description is interesting too, and goes a little more into the specific songs.


Prelude to Act III of Lohengrin, You-tube link above.  Does this sound familiar?

Many would find this offensive, but the Prelude to Act I was used (most ironically) in a scene from Charlie Chaplin's The Great Dictator, made in 1940, where the title character dances with a large globe.

It's also interesting to search You-tube for examples of Liszt's piano transcriptions of Wagner's music. We can imagine Mrs. Howard Glover, the first CM Music Appreciation mama, playing it in much the same way for her son.  "Elsa's Procession to the Cathedral" seems popular.
Posted by Mama Squirrel at Wednesday, October 22, 2014